A guide to learning phonics with RTL English

Phonic sounds are taught primarily to teach children to read, to pronounce English words correctly, and as an aid to spelling. Teaching Phonics in every lesson has enabled the students to reach this goal. The definition of Literacy is‘having the ability to read and write’. RTL students learn to be ‘literate’by becoming familiar with Phonics and by using the sounds to read with ease and confidence. The structured, step by step, RTL system has always included the 44 phonic sounds, which teach and reinforce speaking, listening, writing and reading skills. This can be seen on pages 3 & 4 of 324 lesson books used throughout Kindergarten and Primary school. They continue to be used for decoding new words and pronunciation throughout Secondary school. We believe that the system is the reason for the student’s progress and confidence as evidenced by the excellent results for Trinity and Cambridge.

Our aim is to teach students to read as soon as possible. Therefore, we teach both synthetic and analytical phonics. Words are decoded as soon as sounds are learnt.

This relies on the student being able to follow and understand the practice of‘onset and rime’, to understand that apple begins with ‘a’, to decode long words into smaller parts, to ‘match’words with pictures, to develop a reading list of‘sight’ words (some words just have to be memorised) like was; saw; rhyme; rhythm. We have a completely holistic approach and it makes a difference to the students’ speech and reading competence.

This is the act of building up, or putting together, individual sounds. The children synthesise the sounds of the letters; they blend the sounds – just as synthesising music is blending musical notes. There are 44 phonemes (the smallest units of sound). Students begin with the simplest sounds and move gradually onto more difficult blended sounds.

Why does RTL spend so much time and effort teaching ‘Phonics’

Is teaching phonics the only method of learning to read?

No, there are many traditional ways in which reading is taught. In fact not all words can be taught by using phonic sounds alone unless you are familiar with the IPA (International Phonetic Alphabet); ‘was and saw’ are just two examples. Traditionally words were memorised and often associated with illustrations; at RTL we still include flashcards to practise this method. We call matching words with
illustrations -‘picture words’, as in ‘orange’and‘eight’. When the words cannot be matched with illustrations, they are called – ‘sight words’. An example for beginners would be‘colour’. Some reading methods only use flashcards; Cambridge University use flashcards for many of the words for Starters, Movers and Flyers. At RTL English we also use the method of ‘onset and rime’, which encourages children to look at the beginning of the words and ‘pick out’the rhyming patterns. We also teach them to recognise‘word families’as this is very helpful practice for correct spelling.

Is the RTL method of teaching phonics written specifically for ESL children, whose first language is not English?

No, it’s not written specifically for ESL students and was tested on 50 volunteer families in the UK. Children with English as their first language use it all the time – all children learn to read English in the same way, but it is a fact that younger children learn a second language more readily than older students. This is especially true when you consider that the youngest students at RTL are just three years old. However, the fact that Elaine Shannon has taught Chinese children for 35 years explains why she designed the RTL method to be a step by step approach. In her opinion ESL students benefit from a structured lesson plan, first language students find it a bonus and any students with learning difficulties find structure reassuring; all the students move confidently through the lessons.

What experience does the founder of RTL have in teaching phonics and reading?

Elaine Shannon’s earliest experience was understanding, and appreciating, the importance of ‘speech’. As a post graduate nursing sister in London she specialised in teaching deaf patients, and those, who after surgery had lost their ‘voice boxes’, to speak. This ignited her interest in the mechanics of speech and pronunciation, which proved invaluable when teaching pronunciation to Japanese adults in the early 1970s and later formed the basis of teaching‘the sounds of letters’to Chinese children for 20 years followed by 15 years as the founder of Ready To Learn. As the owner of RTL the founder was registered as a teacher in Hong Kong.

Can you explain more about the sounds?

The alphabet has 26 letters, but the letters, when pronounced as single sounds, can be‘long’or‘short’! They can be joined and said as one different sound or they can be blended with the sound sliding from one to the other. The 44 standard sounds cover most examples of pronunciation. They are known as: phonemes, both vowels and consonants, digraphs, vowel digraphs, diphthongs and triphthongs. At RTL English we pay particular attention to the blended consonant sounds, found at the beginning and the end, of many words. These are not ‘extra’ to the 44 basic sounds, but the act of blending or sliding one sound into another sound (and the difficulty encountered by many students) makes it necessary to practise regularly! From 35 years of experience, Elaine Shannon has found that ESL students find the most difficult sounds to pronounce are these consonant blends. We teach 22 beginning blends and 15 ending blends. Therefore we are teaching a total of 44 basic phonemes + 22 beginning blends + 15 ending blends.

Is there anything else I should understand about the way in which RTL English teaches phonics and reading?

At what age do you stop teaching the students phonics?

IPA: What is the International Phonetic Alphabet? Do you teach it at RTL?

It’s a collection of symbols that refer to the 44 main phonetic sounds and other pronunciation symbols. The sounds are obviously incorporated into every phonic exercise. The chart is used to demonstrate the nuances of speech to students, and adults, who wish to correct their pronunciation. The IPA symbols are most often found in dictionaries, and particular, in those that translate English to another language like Chinese for instance. IPA is rarely taught, if ever, to children or students who have English as their first language.

The RTL guides often refer to the word ‘decoding’, what does it mean? How is it different to ‘sounding out’?

Decoding is the practice of separating words into recognisable ‘units’of sound. For example: sheep would be written as sh + ee + p. The important thing to remember about decoding is that the student can recognise the word when the sounds of the units are said aloud. Sounding out is useful for single sounds, as in c a t, because the sounds can be easily put together and they are instantly recognisable. But it is very confusing when used for a word like o r a n g e – the single sounds cannot be recognised as words.

Where are the sounds taught in the RTL English Levels?

The following chart gives an overview of when the phonic sounds and new words are taught in the RTL Levels: The following examples, showing Pages 3 & 4 from the RTL books, show how the sounds are incorporated into every lesson.

Do the students have to learn all the sounds first before they can read?

No, as soon as new words are introduced, they are decoded by using the phonic sounds already known, plus any new sounds needed. Examples of this are given later. Page 3 is divided into, a) phonic exercises and, b) the decoding of new words. The following pages give an outline of the Phonics taught throughout the RTL English Levels. 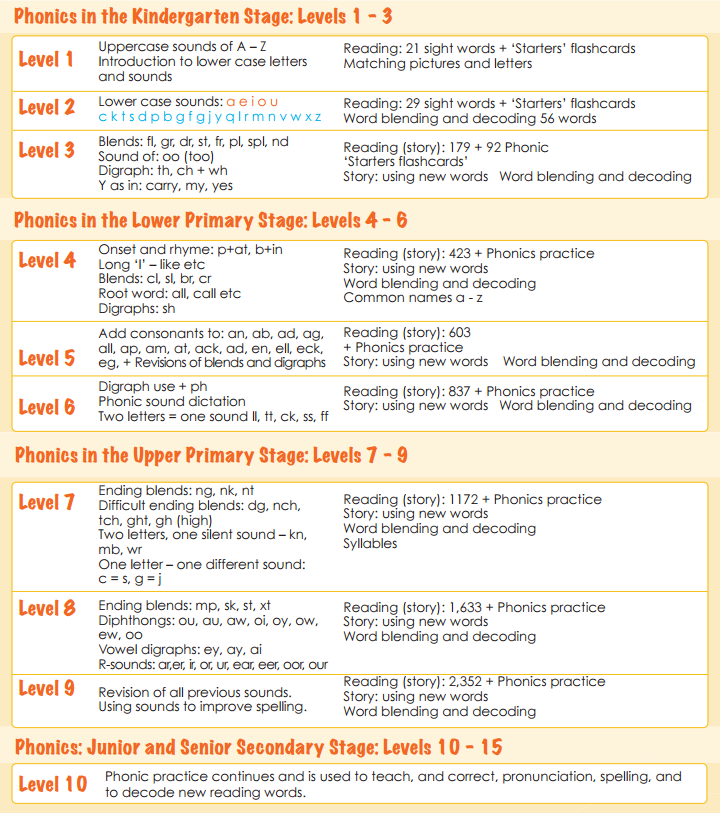 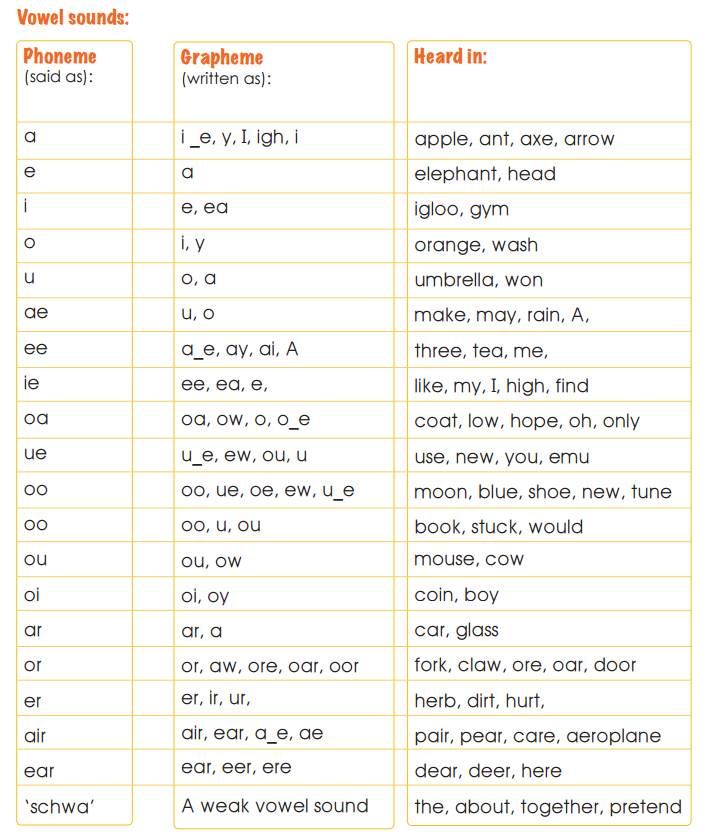 How about phonemes & graphemes? 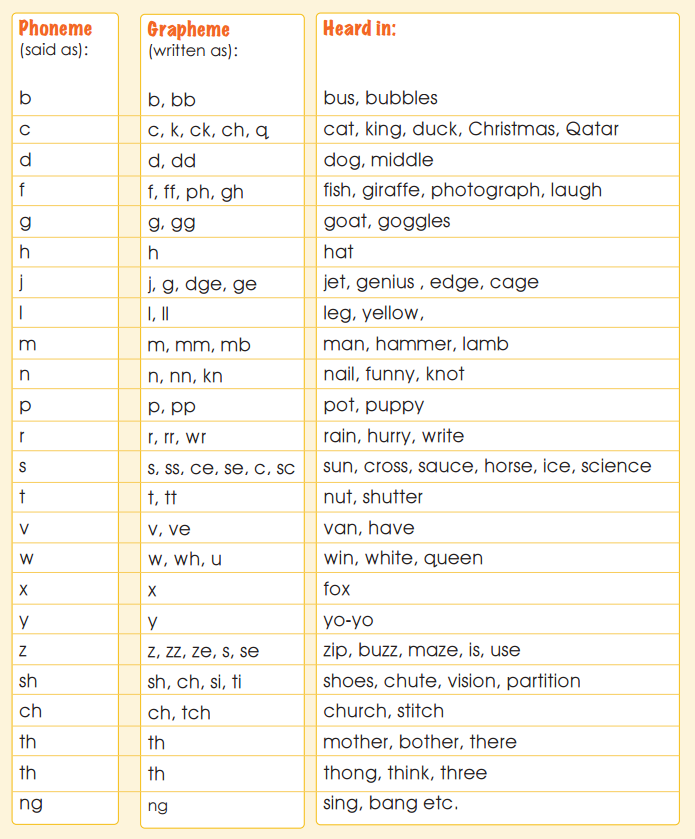 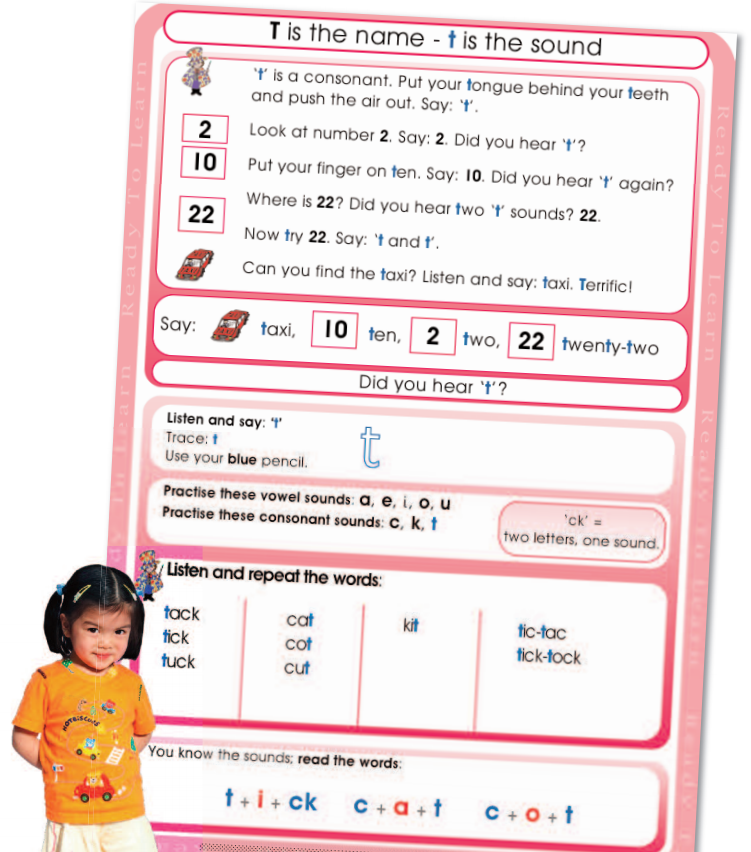 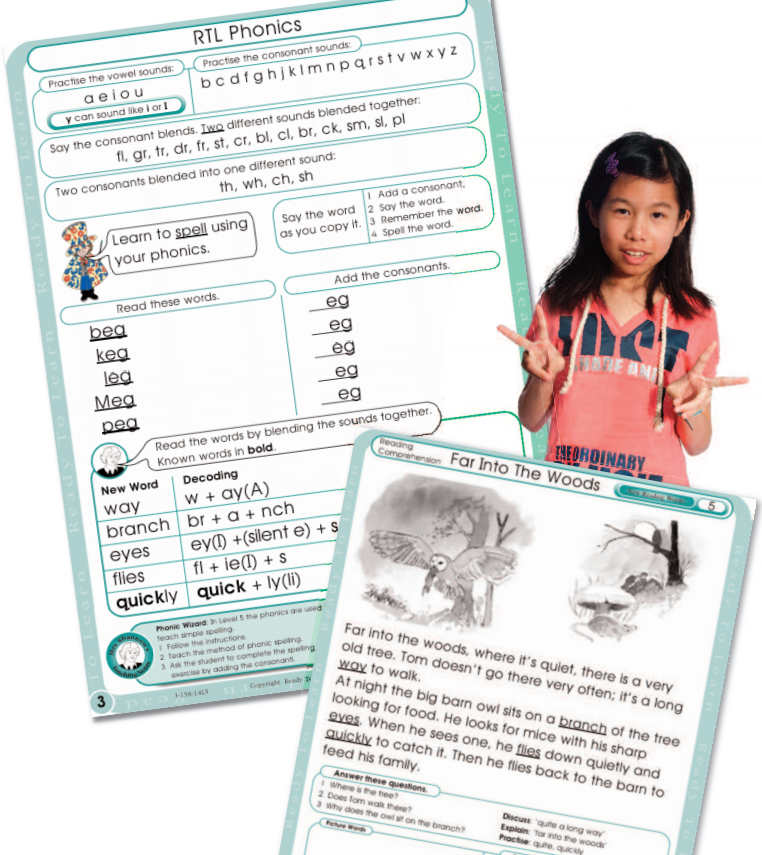 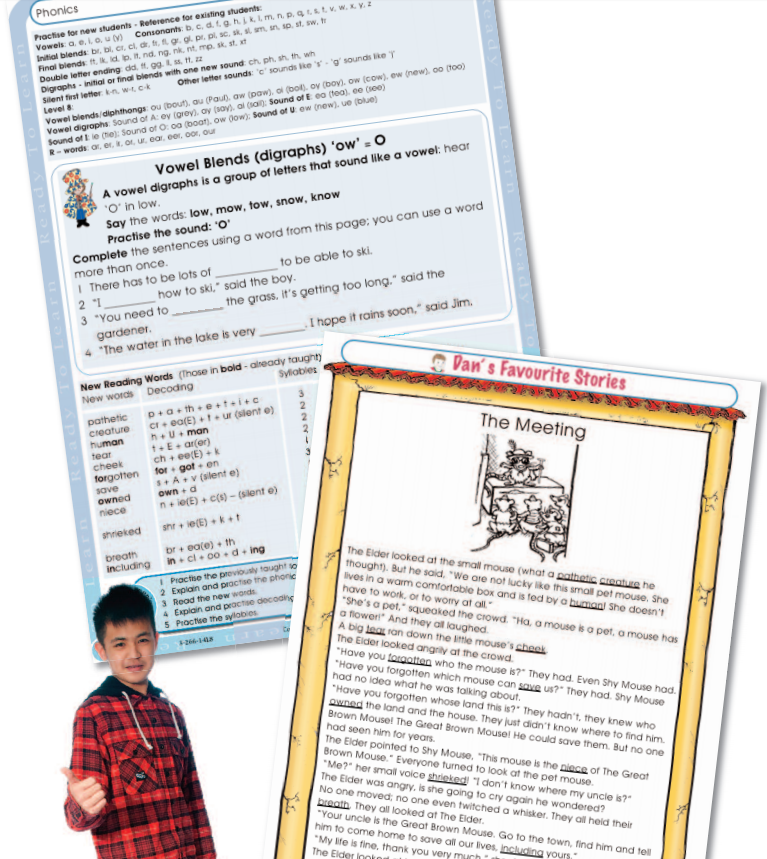 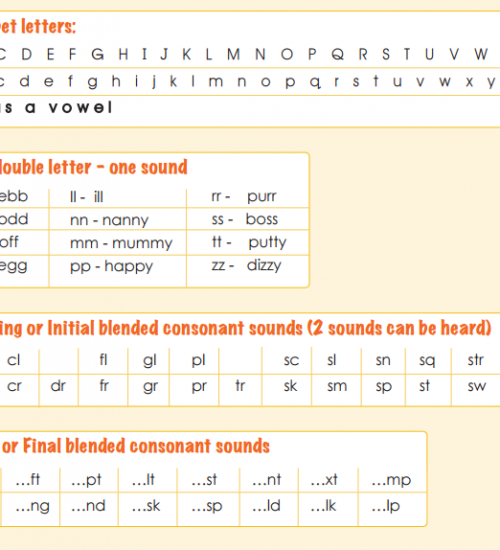 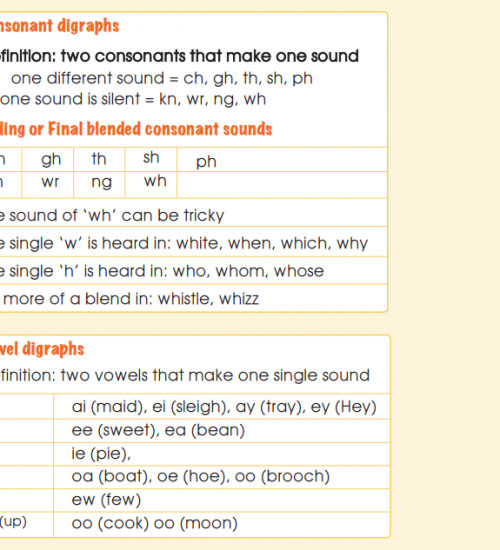 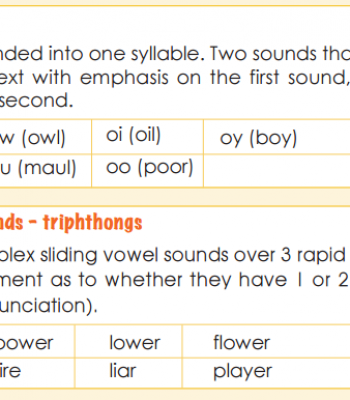 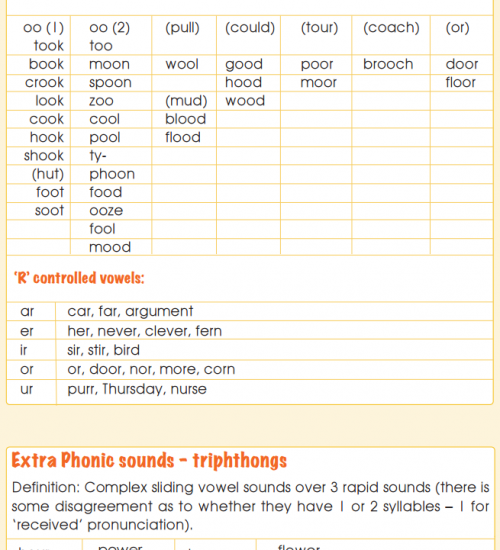 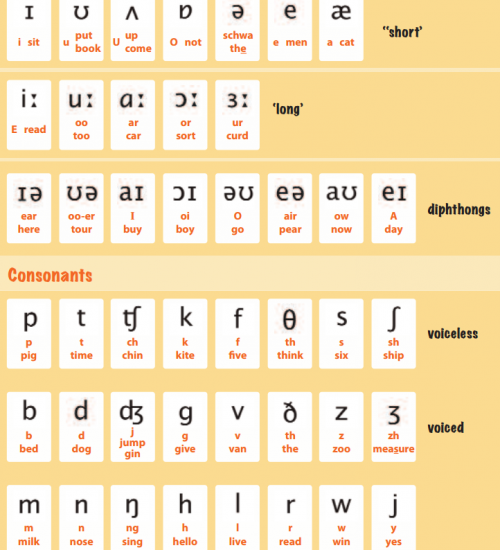 The RTL English Learning System offers a transformative step-by-step method of study with 5 developmentally appropriate stages, 15 series of increasing difficulty, and over 500 step-by-step lessons. RTL English will give your child a head start, or help them catch up. It also challenges more advanced students. RTL English offers 15 years of learning for children aged 3 to 18 years old; so whatever your child's ability, there's sure to be an RTL English workbook that's suitable for them. For over 26 years, RTL English has been taught millions of times to children in 21 countries worldwide.

This website uses cookies to improve your experience while you navigate through the website. Out of these cookies, the cookies that are categorized as necessary are stored on your browser as they are essential for the working of basic functionalities of the website. We also use third-party cookies that help us analyze and understand how you use this website. These cookies will be stored in your browser only with your consent. You also have the option to opt-out of these cookies. But opting out of some of these cookies may have an effect on your browsing experience.
Necessary Always Enabled
Necessary cookies are absolutely essential for the website to function properly. This category only includes cookies that ensures basic functionalities and security features of the website. These cookies do not store any personal information.
Non-necessary
Any cookies that may not be particularly necessary for the website to function and is used specifically to collect user personal data via analytics, ads, other embedded contents are termed as non-necessary cookies. It is mandatory to procure user consent prior to running these cookies on your website.
SAVE & ACCEPT